Grinch Gets a Heart 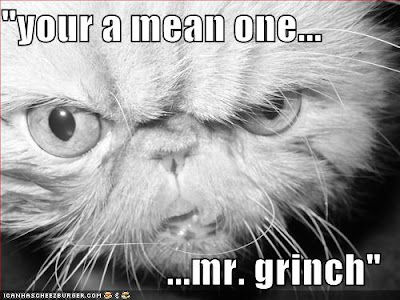 Christmas 1997. Well, there we were. Life, as usual, had twisted us in knots. We were short on money, long on bills, and the holiday was around the corner, nipping at our wallets. That year we had a new miracle in our family. Her name was Talitha and she wasn't old enough to know that she was a miracle.

I watched her being born back in September. My younger daughter and her husband were having tough times so they were living with us… which meant that I got to see her every day. She was nearly three months old and changing almost by the hour.

Back in my more arrogant days, among the many silly things I said, was one particular gem—that none of my children would be allowed to move back in with me once they were on their own. I’ve been forced to eat my words several times. That Christmas both of my daughters were living with us! In any case, I have found that God generally gets what he wills, one way or the other. That June, in a matter of twenty minutes, he simply removed all other options. God was determined to give me a blessing I didn’t want.

Tough times can shrivel the soul. On the outside, I carried on, but on the inside, like the Grinch, my heart was several sizes too small. And then, God sent a gift into my life. Life was still tough. There was little income and large out-go. But when I came home from work and held my granddaughter, things were okay. I forgot how precious the little children are. I harbored resentments and bitterness because of my own failures with my children. With this tiny baby, I was able at last to forgive myself for my failures and simply allow myself to love her without expectations or conditions. When I watched her young parent's faces when they held her and cared for her, then I knew that I did something right.
Talitha is twenty-two now. Life has whizzed by, but when I look back, she was still a miracle. Merry Christmas.
Anny
Posted by Anny Cook at 1:50 PM