Your Doing It Wrong! 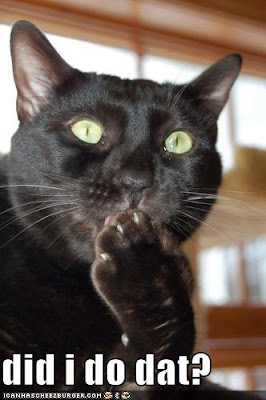 Heh. I spent the entire evening (five o'clock to nine o'clock) discovering that whatever I knew about diabetes was wrong. As usual, they changed the rules on me. So at ten thirty last night the house hunk and I were in a grocery store shopping for the right stuff. I do not do well in grocery stores in the best of times. Shopping late at night after sitting in a class room for four hours is not my kind of fun.

I love classes like this. I came home with a book, charts, booklets, and my personal meal plan. And this is only the first week. My personal meal plan calls for me to eat about twice as much as I normally eat. Almost all of the extra food is vegetables and fruit. But there's also three extra pieces of bread and seven glasses of water added. I foresee many trips to the bathroom in my future.

For the next two weeks, I will be counting carbohydrates and keeping a food diary. I have a neat little booklet that tells me whether or not an item is a carbohydrate and exactly how much of it I'm allowed to eat. They cautioned us about low blood sugar and gave us instructions on what to do if that occurred. So far, I would be thrilled if mine dropped to the mid range instead of hanging out there on the high end.

The funniest part of the meeting came when I asked about the hot flashes I have every morning. Everyone else--even the men--confessed to the same symptoms. So the nurse promised to check it out. One of the guys swore he was going crazy. But we all agreed that his symptoms probably weren't due to menopause. The nurse told us we were the first class to ever mention that particular symptom. Heh. I always was a little odd.

So I've embarked on a new life path. Good news? Lost five pounds in the last five weeks. Better news? I wasn't trying to lose weight. Wonder what will happen if I actually work at it?