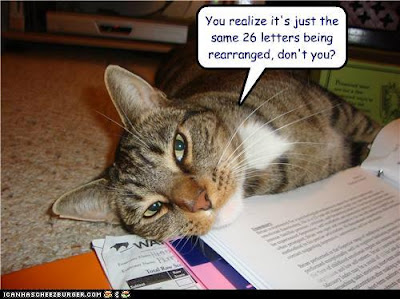 Since I'm at a stand-still on my current works in progress, I decided to do an "audit" of my other wips in the hopes I would find a previously unperceived treasure. After the first five or six, it was obvious I would need a list. The list consists of title, current length, and possible target publisher. I ended up with twenty two works ranging from a mere jumpstart of 1K to a twelve chapter story of 40K. That last one is book two of the series I'm currently working on and I estimate it will top out at 65K.

I have three others that are over 20k. And the rest are a middling bunch of story starts between 5K and 10K. As part of the audit, I read every wip (except for the 40K jobby). My intent was to scrap some of them. Unfortunately, that's not what happened.

Instead, I grabbed a notepad and started scribbling ideas and notes for each story. Seems I'm not quite ready to give them up after all. By the time the house hunk interupted me for the eighty-seventh time, I had several sheets of possibilities. Clearly, I can't work on them all at the same time. So the real problem is picking an alternate wip to work on when I'm stalled on Sinister Spear.

Which one will it be? Something short I can market as a quick little read? Or something longer? I don't know. Likely I'll sleep on it tonight and choose in the morning when one of them bubbles to the top of the pot.

What about you? Do you have more than one work in progress in your trunk? How do you decide which one you'll work on next?