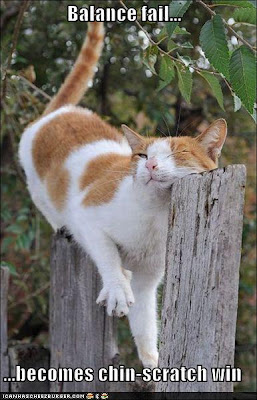 Win. Fail. It all depends on how you look at it. How often has something gone wrong that actually turned out for the better? Isn't it all a matter of perspective?

Humans tend to remain in their same stodgy path of least resistance until some incident demands change. We take the same route to work. Eat the same foods. Carry out our boring routines until pushed in a new direction. A bridge that is out forces us to take a new route. The doctor tells us we can no longer have caffeine or sugar. Our job schedule changes and we discover the joys of a dawn or sunset.

Every year millions of people contemplate changes in their lives as the new year rolls around. Some actually carry out those changes, but most fail to fight the entropy of human life for one simple reason. We don't have a compelling reason.

Oh, in our minds, the reason is valid or reasonable. For instance, I know I need to lose several pounds. Everyone agrees this would be a good thing. My doctor, my friends, my family all agree. But until I have a compelling reason, it won't happen. That's the true reason most people aren't successful in their weight loss programs. They're not on board with the changes required. The commitment isn't there.

It's easier to maintain the status quo.

I read a line once in a romance..."he's like an aircraft carrier--hard to turn around". Yeah. That's us. Changing direction is difficult. Unless we take a lesson from that ship and change direction bit by bit. So today (and maybe for several days until it's part of my new routine) I'll spend more time on my feet. That's all I will require of my new routine.

It seems simple enough, but I expect it won't work out that way. Probably I'll have to set a timer to remind me. Get up! Walk around. Bend over and stretch. How long do you suppose I should commit to my new routine? Ten minutes per hour? Yeah, ten minutes. So. This is my new commitment for the rest of January. Let's see if I can manage this small change for the next two weeks. Who knows? I may find I like it.

It might just turn out to be a win!