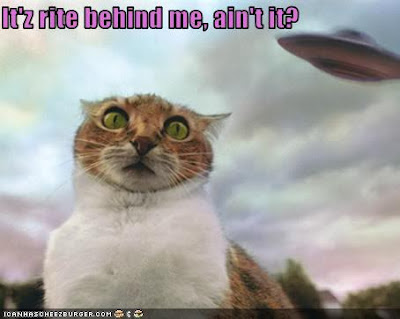 On Facebook a fellow author posted a question, asking if anyone had witnessed a UFO. It reminded me of my two encounters--separated over a fifteen year period. Now before we get started, I just want to clarify something. I am NOT saying I saw a space ship. Or a flying saucer. Or aliens.

My first encounter was at three o'clock in the morning in the late 1970s. I worked at McDonald's at the time and I was driving home from work on a very lonely, very dark country road north of Houston, Texas. Out yonder in the sky in front of me I noticed something, lit up like a convention of cop cars. I slowed down as I tried to figure out what it was. Very abruptly, it started spinning, then whizzed toward me. I slowed down even more, absolutely positive it was a bunch of emergency vehicles racing toward me and in some weird optical illusion, they just appeared to be in the sky.

But no...whatever it was zipped past me overhead, silently, but still spinning. Well, I stomped on the gas pedal, rolling down that dark road like a host of demons were on my tail. In the mirrors, I could see it pacing me and had the nasty thought it was herding me toward some specific destination. I sped along in the dark, right on the edge of danger as I reached my subdivision. When I pulled in my driveway and rushed into the shelter of my front porch, whatever it was shot straight up, moved over the roof and disappeared. Poof! Vanished.

Nearly fifteen years later, I lived in New York. I worked the evening shift at a warehouse--as did my friend and two sons. One night they sent us all home early. I parked in my driveway around nine-thirty and everyone bailed out of the car, pleased we had an unexpected free night. I was going to walk partway down the street with my friend.

Suddenly, my son exclaimed, "What's that?"

We lived in a small village. It was early enough that there were quite a few people still out and about. In the sky above us was an enormous SOMETHING with a row of flashing lights and it was slowly spinning in place. Many people saw it. It stayed in place for at least fifteen minutes. Then, it suddenly zipped away. What was it? I don't know.

Two days later the "authorities" reported it was a group of ultralight flyers pulling a prank. Uh, no. I've flown in an ultralight. One thing they do not do is hover.

So, they were both unidentified flying objects, but that's about all I can say with certainty. And both experiences were definitely strange.

What about you? Have you ever seen strange things in the sky?