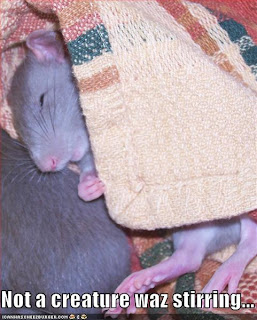 Christmas Eve. Traditionally, parents rush around getting the kids to bed and then when they've finally fallen asleep--around three a.m.--the parents stash stuff under the tree and toddle off to bed.

The year that our sons were eight and nine, we (Santa) bought them new bicycles. Unfortunately, they came unassembled. Putting them together in a cold garage quickly turned into a discouraging endless job. The directions were no doubt written by someone overseas and made absolutely no sense.

While we alternately picked at each other as I tried to decipher the directions and the house hunk tried to follow them, the bikes remained stubbornly unassembled and the night steadily grew colder as the hours passed. At some point, the house hunk declared that he was just going to put the boxes under the tree and let our son Tony assemble them on Christmas Day.

I, of course, protested that wouldn't be fair. He was getting tired and cranky so I offered to get him something warm to drink.

About then, the door opened and Tony stood in the doorway--fully dressed. "Are y'all about ready to give up? Or should I go back and lay down for a while?"

"Why are you dressed?" I demanded.

"Well, I've been waiting for you to realize that you can't put things together worth beans. So, if you're ready to give up, I'll put them together so we can get some sleep tonight before the rest of them wake up." Clearly, he was exasperated with his two numb-skulled parents.

The house hunk willingly handed him the screwdriver and headed for bed. I hung around until both bikes were assembled and waiting under the tree--thirty minutes later, tops!

After that, Tony was appointed the head assembly elf at Christmas. It was a position he proudly held until he left home to join the Navy, where they gladly put him to work, using his mechanical skills.