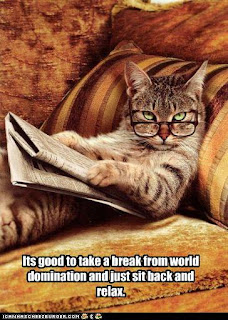 When I was younger, there was a concept called 'break time'. Most paying jobs included time for lunch and one or two breaks. If you worked long enough at the same job, you earned vacation time. I used to write during my lunch and break time. Then something happened.

Job pressures made me feel guilty about taking my allotted time. Phones were ringing. Long lines were forming because there weren't enough workers to handle the customers. Oh, noes! They needed me!

Right about the time I left my last job, cellphones really caught on. Now, it's possible for your boss to reach you at anytime, day or night. You're never really off the clock.

We allowed it to happen. We live in a noisy, busy world. What if we turned it all off?

Quiet. We would have blessed quiet to contemplate life. I don't think it's truly possible to appreciate the bounty we've been given when there isn't quiet to enjoy it. Our lives are so filled with the hurry-scurry of daily busyness, we don't have time or peace to ponder on the important things.

We need to start taking our breaks...set aside a specific time with no distraction, no music, no computer, no TV, nothing to interrupt our time. Start with fifteen minutes a day. See what happens. 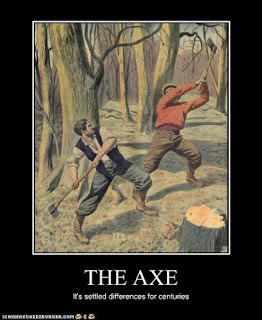 For all those folks discussing the pros and cons of gun control. Consider the lowly axe. It's a perfect weapon for defense.

The long handle creates an advantage when dealing with an assailant who is wielding a knife.

The blade is guaranteed to get the job done, even if it isn't razor sharp. All you have to do is connect with the target.

As the caption says, it's been the weapon of choice for thousands of years--because it's reliable.

AND when you aren't using your axe for self-protection, you can use it as a door stop or to chop wood. Don't delay! Get your axe now before Congress enacts Axe Control Laws.
Posted by Anny Cook at 11:23 AM No comments: 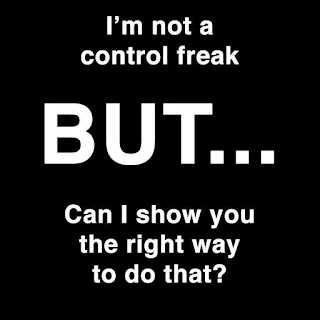 For most of my adult life, I've been in control. I'm one of those individuals that follow people around redoing a job after they've done it because it wasn't done my way. You know. I'm the one that rearranges the dishwasher after it's loaded. And refolds the towels because they're not folded like I want. I'm your basic control freak. My way or the highway, as they say.

Then, a couple months ago, I woke up in blinding pain. Over a period of two weeks, my condition had deteriorated to the point I couldn't get out of bed by myself. If the hunk didn't perform the chores, they didn't get done.

That's when I started learning the art of 'letting go'.

A control freak tends to flatten the confidence of the folks around them like a steam roller. In their quest for control, they send out a strong, clear message, "You're so incompetent, I don't trust you with this task."

Many of the control freaks tell themselves, they're not really seeking control so much as performing the task correctly on the first pass, thus saving time and energy. They're the ones who make their children's beds and do their laundry--even when they're adults...because, hey! Obviously, their son or daughter wouldn't perform to their high standards. In this way, they foster dependence. And of course, that just proves the control freak is desperately needed.

Think about that for a moment. I'll wait.

There is nothing wrong with having standards. But sometimes we set the bar so high, no one can ever meet it. They all back off and quit trying. It's our own fault when we end up having to do everything on our own.

So back to my personal epiphany. I discovered the world didn't stop if I wasn't there to take care of things. Dishes still got washed. Food was prepared. Underwear works the same whether it's folded or not. Mostly, it doesn't really matter which pair of shoes I wear. Life went on without me being the boss.

Much of the pain is under control now. And if I move slowly, I can get around on my own with the help of my walker. But I'm not too worried about 'doing'. I no longer itch to redo chores someone else has done. I've found freedom in letting go.
Posted by Anny Cook at 12:01 PM No comments: