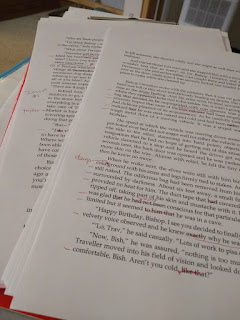 Or maybe, I can just color 'em all blue...Then I'll blend in with the rest of the folks in Mystic Valley.
Posted by Anny Cook at 4:23 PM No comments:

You Are Not Me 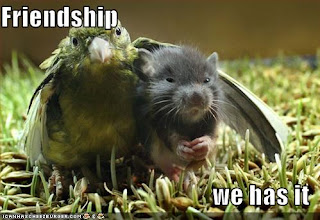 A child once asked, "Why don't white people and black people like each other? Why are they mean to each other?"

I could have answered at length. I could have explained about slavery and white privilege and all the long history of different races and ethnic groups. But I didn't. That would be a way to white-wash the truth. The simplest truth in the world is this: they are not us.

From the dawn of humanity, we've protected our own and fought off the 'others'. One would think we've learned something, but obviously not. A lot of folks think only whites are racist, but that's not true. You only have to be the minority in another racial group to find out the reality of this.

The hunk and I once worked at a fast food restaurant where we were the ONLY white employees. Most of the customers were a mixed group of black, Latino, and even Asian. The rare white tourist wandered in looking lost and uncomfortable. In our time there, the other crew people treated us with respect and courtesy, but the customers...well, that was different.

I didn't take it personally because I understood the underlying mechanism. I was not one of them. I didn't look like them. I was in their space, making them uncomfortable and wary. That is the hard, unvarnished kernel of truth.

In our multi-cultural, multi-ethnic world, it is tough to integrate when underneath we still have that visceral caution. They are not us. We are not them. We look different, speak different languages, worship different gods, dress differently, eat different foods. It doesn't matter how much effort we put into understanding each other, we never will on that deep visceral level, anymore than men understand women or straights understand gays or any other number of differences out there.

So what's the solution, then?

Kindness, courtesy, and a celebration of our differences. As long as we allow them to divide us, all the talk about racial equality or gender equality or any other equality will be just that--talk. Instead of talking, maybe we should celebrate our commonalities and showcase our differences. Share those things that make us who we are.

We can't do that until we admit who we are. I am a senior citizen. White, female, protestant, heterosexual. As far as I can tell, that doesn't make me special in any way. If I have special qualities, I hope they are things like generosity, empathy, love, and comfort. Those are the things that count. That other stuff? It's just the casing I was born with. Nothing special at all.
Posted by Anny Cook at 3:59 PM 2 comments: 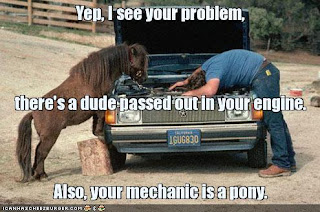 When I was a youngster, there was a well-known story titled, the The Emperor's New Clothes. It was about an emperor who strolled around naked while all the sycophants surrounding him exclaimed over his new clothes because none of them had the courage to point out he was naked. It takes a child to point out that the emperor is in fact naked.

Today, our congressmen and congresswomen, our judges, our department of justice are too cowardly to declare that in fact we are naked. They refuse to see the obvious truth everyone else sees. Instead, they spend their time bragging about the wonderful new clothes we wear. In November, we have the opportunity to reveal the truth by going to the polls to vote.

Isn't it time we declare the truth for all to see? In fact, we are naked.
Posted by Anny Cook at 2:42 PM No comments: 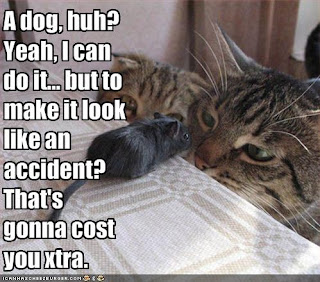 Recently noticed a spate of posts of Facebook mourning the (sudden?) death of an author. Many of the posters mention various ways the deceased author mentored them or how much they will miss the author's books.

I find it sad that we wait until someone dies to tell them how much they mean to us. I further venture there will be folks who buy this author's books now when she's no longer around to know or care. What is it in our makeup that we wait until folks are dead to celebrate them?

How many times do we attend a funeral for someone, often driving many hours or flying across the country, guilt-ridden because we didn't visit them when they were alive? It's not enough to say we would have visited if we could. If we can go to the funeral, then why not before they die? After all, the only ones who know we showed up are the living.

So here's my idea. Let us have a contract with each other. Every single day, let us find one person to celebrate publicly. This person might be family (though no one should have to remind us to celebrate our family)! But I propose we choose someone unrelated--someone who likely has no idea what their contributions to our life have meant. Call them out. Brag on them to all our friends. Let them know just how special they are to us.

While they're still alive to appreciate it.
Posted by Anny Cook at 3:18 PM No comments: 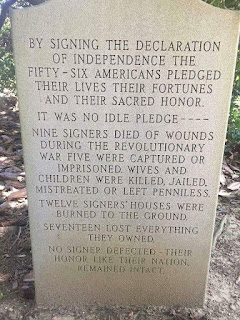 More than any other 'holiday', Independence Day calls forth memories of the past. I suspect most of them are false collective memories. There are memories of parades and cookouts and picnics and other such. Oddly enough, I don't have any of those memories until we moved to Chicago.

When I was a youngster, we lived in Arizona. There were no parades. Or cookouts. Or any commemoration of the day that I remember. Perhaps it was because we lived in tiny villages. Perhaps it wasn't such a big deal before it became a commercial vehicle. I bet if there was no money to be made from it, the Fourth of July would sink back into the obscurity of private backyard celebrations with sparklers and water sprinklers.

Patriotic posts notwithstanding, there really isn't much patriotism marking our national birthday. Mostly, it's dwindled into a day off work that serves for an excuse to terrify the neighborhood with obnoxious fireworks and excessive drinking.

I like a cookout as much as the next person, though not as much as I've aged. I confess I enjoy the AC on a hot steamy day and find the summer pests like flies and mosquitoes generally annoying. But all of that is just window dressing for a day that seems to have lost it's meaning. Like most of our holidays here in the states, we've forgotten their origins in our rush for pleasure and excess. I wonder if this is deliberate ignorance, or simply more comfortable than true remembrance.

Some folks bemoan the lack of respect for the flag or the national anthem or other patriotic issues, but the truth is more subtle than that. As a nation, we've forgotten what this date was chosen to commemorate. If we were to ask the average citizen why we celebrate, most of them wouldn't be able to explain any particulars past the bare event denoted as our nation's birthday. MOST have no idea what the Declaration of Independence is all about. They don't know the real sacrifices made by the men--and women--who dared to stand up for what they believed to be right.

In the hullabaloo of fireworks and cookouts, we've forgotten why we have this holiday. It isn't because we're the greatest or the most powerful or have the biggest military (though I do offer my humble gratitude for all those who serve--present or past!) This day should be a remembrance of the fifty-six men who laid it all on the line back in 1776. They were men who had no idea what would come of their actions. I feel certain they would be most astonished at the spectacle we've turned it into today.

If you would truly honor them, then take time to gather your family and friends around you and read the Declaration of Independence aloud. Read the names. Honor them with a moment of silence and respect. Without that, the rest is empty rhetoric and hotdogs.