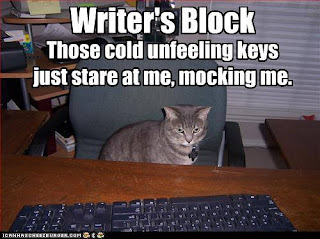 Writing is more challenging the longer you're away from it. The brain is a clever opponent, zigging this way and that, presenting other more attractive options than sitting down and actually writing. There are oh, so many books to read. And social media pages crying out for attention. And of course, the never-ending wonder of the Internet. If all else fails, the brain just takes...a nap.

What's distracting me now? An orange. The scent of it--even through the closed refrigerator door--is soooo alluring I can't stand it. I must have the orange! I. Must. Have. It.

Wait! The blog post isn't finished. No orange until it's finished.

No, no, no. That's not right. Say what you have to say. Hmmmm. What was I gonna say? Something important? No-oo.

No! Hands on the keyboard. Write! Write, write, write. Um, write? Yes. Write. But, but, writing is so hard. So hard. And there's an orange in the refrigerator. And a cheese stick. Really, writing is too hard to do today. Maybe tomorrow... 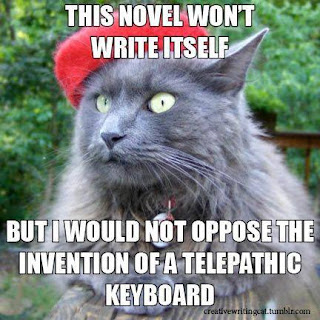 In the past few weeks I've corresponded with numerous writers who all began writing about the same time I did. Everyone is reporting the same thing...no writing going on. They sit down in front of the big white screen and freeze. The brain doesn't work. The joy and desire isn't there. Nothing. Nada.

Oh, I understand! It's been a long dry spell for me. Then today as I was putzing along with a computer game the reason dawned. It's damn hard to write when you don't really care what happens to your characters. I think we've been victims of our success.

Back in the beginning when we didn't know much, we just wrote. All those things we worry about now like POV and character development and grammar and blurbs and other crap too stupid to even discuss just gets in our way. We've forgotten how to just tell the story. We're worried about writing the great romance/mystery/paranormal/sci-fi/fantasy novel--instead of just writing the story.

How did this happen? I think we're all so hung up on 'improving' and 'honing our skills' and all that other stuff that gets in the way that we're afraid.  Yep. Afraid we can't measure up. Afraid we won't be a success. Afraid someone won't like what we write. Too bad. So what if someone doesn't like it? Back in the beginning, weren't we eager to share our stories with someone...anyone? And didn't we write because we loved writing? Didn't we love our characters to the point of living with them day in and day out so that the rest of the world didn't really matter?

If we aren't involved with our stories, why would anyone else be? That's what we're missing. Recently, I've read several books, some that we'd even call novellas, that are NOT the great American romances. But you know what? I love them. I can't wait until the next ones in the series come out. And do you know why? Because it's obvious their creators love them. They're engaged in telling their character's stories. They want to share their character's adventures.

I have a story I've struggled with for several years. And here is why. I forgot to just tell the story. I was afraid I couldn't do justice to this character. That his story would be a 'throw-away'. And in refusing to share his story, his triumph, I did him a great injustice. I didn't trust him to let me tell his story. I was afraid.

We have to get back to the basics. Tell the story. Let the characters shine through.
Posted by Anny Cook at 1:18 PM 6 comments: