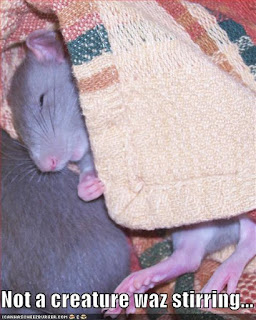 It was two days before Christmas and Herald, the Christmas Mouse was too tired to move. When humans started the Christmas Shopping Season, they didn't think about how hazardous all those busy shoppers were for the mice. Why, a mouse could barely scurry across the wide hallways in the mall without someone stepping on his tail--or worse! It was up to Herald to take care of all the tiny mouselets while their harried parents shopped.
Some of the mouse children didn't want to stay in the nursery. Some pulled on Herald's tail because they wanted to shop with their Mamas. There were fifteen children from the Snow family and they all wanted something to eat! Little Angela Tree sucked her paws and bawled for her Mama.
Herald ran from child to child, wiping whiskers, offering cheese crumbs and toys, and refereeing arguments between the two oldest boys in the Star family, Twinkle and Shiny. Herald desperately wanted a few minutes of quiet.
Then he heard a beautiful sound drift through the nursery door. It was the sound of someone singing. One by one the mouse children grew silent. As the singing grew louder, the mouselets all gathered on the rug in the center of the room and they sat down in small groups, listening carefully to the music. Soon Herald realized that some of them were humming the melody.
In the still, quiet nursery, Herald crept to the door and peeked out into the corridor. A young human woman sat on a bench in the center of the mall, singing all alone. People were smiling and stopping to listen. Cranky children who had been crying, grew quiet and leaned against their weary parents as the young woman continued to sing. Slowly, peace fell over the mall to the strains of a Christmas song. Then Herald recognized the music. She was singing the Christmas Lullaby--Silent Night.
Herald turned to look at the mouse children and saw that they were all asleep. Twinkle Star was even snoring!
Softly, Herald crept out to the young woman and stood near her foot with his whiskers twitching and his beady little eyes shining, listening to the beautiful song. And then, wonder of wonders, she bent and offered him a perch on her fingers. It seemed to him that she even perhaps invited him to sing with her.
Suddenly, Herald wasn't so tired. He opened his tiny mouth and began to sing. And as he sang with all his heart, the Christmas Spirit swelled within him so much that when the song was finished, he roared out, "Merry Christmas Everybody!"
Copyright Anny Cook 2007
Posted by Anny Cook at 1:03 AM