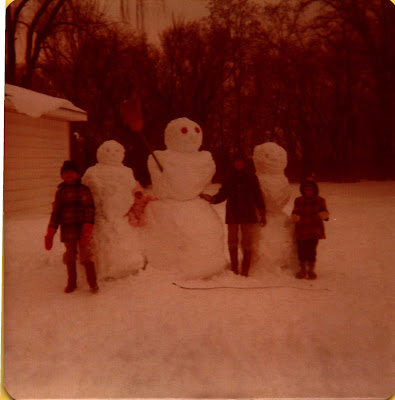 1978. We traveled from Houston to Chicago to spend Christmas with both sets of our children's grandparents. The kids woke every morning to rush to the windows to see if it had snowed. And of course, there was no snow.

At last, we reached the day we had to leave. All vacations have to end. And lo, when we woke up, it was snowing like crazy! Well, now, we couldn't possibly leave without the kids taking the opportunity to play in the snow.

Did it matter that no one had snow gear? Absolutely not. Grandma produced heavy socks for them to use as mittens. And breadbags over their shoes substituted for boots. The boys wore Grandpa's extra hats. And Grandma and Grandpa joined in the snowman competition.

Our youngest child was only six months old, but she couldn't be left out so if you look very carefully you'll see her perched between the two snowmen on the left. She's that pink blog.

An hour later, dry and warm, we were on the road home. We had quite an adventure because of our delay to play. In Oklahoma, the Interstate was closed. We didn't have a dime on us, but the Holiday Inn agreed to take a post-dated check. And all the meals were added to our room bill. Can you imagine that happening now? Of course, almost everyone in the hotel was from Houston. The folks across the hall from us lived in our same subdivision.

The next day, we slithered through Dallas/Ft. Worth on ice covered roads, but we arrived home safely by evening. Was it worth it? Oh, yeah. Every single hair-raising second!
Posted by Anny Cook at 11:08 AM