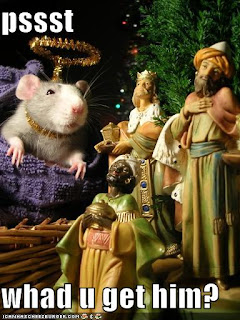 Our last Christmas in Texas was grim. The oil crisis was in full sail. We wavered month to month, robbing the power bill to pay the mortgage. And there just wasn't any money. None. Christmas miracles depend on someone else having the wherewithal to share what they have. In Houston that Christmas, no one had anything to share.

I was close to tears when my neighbor called on Christmas Eve to tell me our local pharmacy had stuffed animals on sale...$1.50 each. We drove down there without much hope and were delighted to find four different 'safari' animals. There was a giraffe and an elephant. A lion and a tiger. They were really plain, though, but Joyce mentioned she was sure she had some red ribbon to make bows around their necks to fancy them up a bit.

Back at home, we located enough red ribbon to make fancy bows and I was thrilled that my kids would have something. Joyce went back home and I arranged the safari under the tree.

I sat on the couch, watching the tree lights blink while I pondered what else I could do to make the next morning special for my kids. They were all old enough to know the realities about money and they weren't expecting anything at all. But like most parents, I wanted more for my children. I grumbled under my breath that it was too bad we wouldn't have our income tax refund for at least a couple more months.

Then I had a bright idea. We wouldn't have the money for a while, but what if I gave them each a promissory note for the future? We had a cheap dot matrix printer, but I composed a note for each of them, printed them out, sneaked into their rooms and borrowed their crayons to color them. Finally, I folded each one and slipped them through the ribbon collars on their stuffed animals.

The next morning, I was truly stunned at how excited they were with their gifts. The girls immediately started making extravagant lists for when they received their money. The boys had a clearer notion about how far the money would go so they were more circumspect. When February rolled around with the check, everyone of them excitedly presented their gift certificate in trade for real money before we hit the mall.

The next Christmas when I asked them what they wanted for gifts, they all voted for gift certificates again. And that became the Christmas tradition. Heh. I suppose I was way ahead of the idea of gift cards.

Sometimes, we just have to think out of the gift-wrapped box.