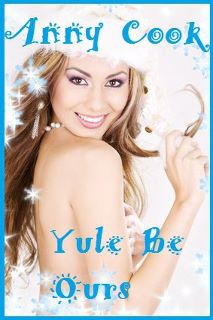 Yep. On December 1st, I'll have a new story out. I love this cover. She's so pretty--and happy. What's this story about?

Here's the blurb: When Dashylla’s masters abandon her in Silver Rock, to be awarded new masters, she makes a fervent Yule-Cris wish for two men who will love her passionately as she yearns to be loved. Nicodemus and Myles arrive in time to make all her wishes come true.

So, what's this about masters and Yule-Cris? On the planet Hypectil, there aren't very many women. The government, in the interest of peace and prosperity, has passed legislation where women are awarded to stable groups of men. Right before Yule-Cris, Dashylla's men prove they aren't quite as stable as they appeared. They abandon her in the tiny village of Silver Rock.

But on Yule-Cris Eve, Nicodemus and Myles show up, just in the nick of time, to rescue her. And Myles and Nic plan to make her life a Happily Ever After.