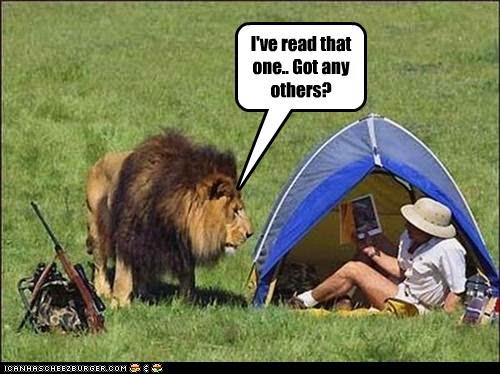 Some folks never re-read a book once they finish it. Others have a shelf of favorites they visit often. I have a room of well-loved books plus two readers and a computer file of electronic books. And I re-read more than I enjoy a never-read book.

I'll be honest. I don't understand folks who watch television when they could read a book. Just do not understand that. Probably it's because we never had television until I married. I never formed the habit of brain doping via the 'box'. Even now, forty plus years later, I grow restless after twenty minutes of television. But give me a favorite book...and I likely won't surface until I've finished it.

In the last few weeks, I've endeavored to read the works of new-to-me authors. Over the years, I've noticed readers raving about this author or that one and I thought maybe I should check it out. Maybe I should find out what the shouting was all about. After some research, I purchased the stories that sounded interesting--and also garnered the best reviews. Not the five star reviews necessarily, but the most coherent reviews, written by folks who had more to say than the book was 'hot, hot, hot!' I've read enough hot books for a lifetime, most of them written by more skilled writers than the new crop.

I wanted to try stories that spoke to a reviewer, that tugged on their emotions. After reading some of the books, I was inclined to wonder if I'd read the same book the reviewer did.

So...back to the tried and true favorites.

In the two past weeks I also re-read my entire Mystic Valley series with an eye to revisions/edits before re-releasing them. They were the first books I wrote. And I see the mistakes I made with them--the favorite words that crept in (that, that, that!) and the weird (mercifully short) bits of dialogue that occasionally popped up. Reading them straight through also showcased the few continuity errors, but those are relatively easy to fix.

The thing is...even after reading them with a deeply critical eye, I still liked them better than most of the recent 'new' books I've read. And that gave me reason to ponder why.

The number one reason was because the stories are the kind I like to read. Well, duh, you say. But you see, writers don't always write what THEY like to read. Too many of them write what they believe will sell well. When I wrote the Mystic Valley books, of course I hoped they would sell well, but first--long before I had any dreams of them being published--first, I wrote them for myself. I reveled in the fine details, the world building, and twists and turns of life in the valley. I thrilled at the karmic, kick-ass endings for the bad guys and the happy ever after endings for the reluctant lovers.

To tell the truth--I never expected to submit the stories. Nope. I submitted them on a dare. So, there you have it. I wrote them for me. And that's why I still love them, warts and all.

I think perhaps writers are so anxious to find that path to a bestseller, to hit that nebulous point where their readers consume their books with rabid gluttony that they forget the basic writer's truth.

It's all about the story.

It's not about how many sex scenes are churned out or how many murders are committed or how convoluted the conflicts for the hero or heroine are. None of that matters if the reader doesn't connect with the characters, if the writing/editing is so sloppy they can't make themselves continue, if the writer is so intent on beating the few facts into the minds of the readers that they repeat them over and over...and over...

First write the story you want to read.
Posted by Anny Cook at 12:41 PM