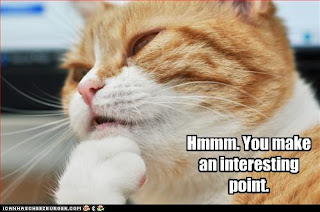 I spend a lot of time contemplating odds and ends. I suspect most people do. Of course, pondering stuff serves no purpose if you don't communicate or share your thoughts with others. That's something we don't seem to do much of anymore. We don't read. We don't talk. We walk around with electronic devices, trusting the keepers of the truth to tell us what we need to know instead of seeking out the truth ourselves.

I wonder if I'm the only one to speculate about what the President-elect is hiding/covering up by sending out all his wild tweets. No one is THAT stupid. Therefore, there is something he and his team don't want us to pay attention to...so there's the wild diversions of idiocy. What are we missing while we're huffing and puffing with indignation? Yeah...that. Diversionary tactics are as old as the hills, but we're too busy looking at the shiny to see the shadows.

I wonder if I'm to only one to see the 'media' is entertainment news. If you listen very carefully, you'll note there's only one--or rarely, two--actual news stories. The rest is fluff and filler. The average news story is approximately two minutes. How much information can be disseminated in two minutes? And why do the news readers (no they're NOT journalists) all smile? It's creepy, you know? What is there to smile about? Their salaries, maybe?

My great uncle Bill didn't get past 5th or 6th grade, yet he was one of the most educated, thoughtful men I ever met. He read everything. Everything. He was a sheep rancher in west Texas but he knew what was going on in Washington, D.C. because he read. Does anyone read anymore? You do know we are the authors of our own downfall, right? Ask the next ten people you meet if they can tell you what the first ten amendments to our Constitution are about. I bet most of them don't even know we HAVE amendments. Some of them think the Constitution is the same thing as the Declaration of Independence.

I believe our lackadaisical attitude has been carefully engineered. Seriously. I mean, how can you account for the rise of the Kardashian/Duck Dynasty/Alien Mystery/Alaskan Bush People? Who, in their right minds consider these programs entertainment? Yet, someone approved them. Someone promoted them. And someone out there keeps generating stranger and stranger program content. That's not some accidental occurrence. It's a deliberate campaign to deaden our brain cells.

The rise of Twitter/Facebook/whatever has far more to do with the spread of racism/misogyny/ignorance/gender bashing/religion than anything else. Where else can you go to communicate with other people who believe the same things you do--or don't? There is power in numbers as we found out in the last election. There is power in organization and communication. And guess what? You don't have to have a brain to use Twitter or Facebook. You don't even have to be literate. All you have to do is click on 'share'. That's right. Click.

Here's what I think. Just because you can legally do it...whatever 'it' is...doesn't mean you SHOULD do it. Maybe, just maybe there should be an occasional thought or two, first.