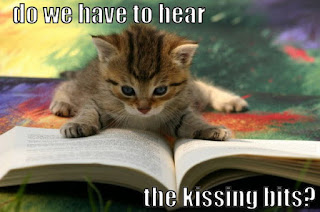 Editing an older book, especially one written for a publisher known for their 'steamy' offerings, can be something of a conundrum. Do you tone it down? Heat it up? Leave it as is?

I know some authors who face similar challenges with technology. It doesn't take long for the entire world of electronics to whiz into an entirely different orbit. Since the series I'm working on has NO technology to speak of, that isn't one of my problems.

But the kissing bits is something else to ponder. I've really looked at the story I'm currently editing, trying to judge what to do. And I've concluded the series will be best left as is. Yep, it's a bit steamy. But the central theme of the series is the cultural differences between one world and another. And how the new-comers face dealing with those differences is what the books are about. Therefore, trying to write around the steamy bits would be counter to the story.

In this case...yeah, the kissing bits have to stay.

Anytime an author edits/revises/changes an older book for the current market, there are always going to be issues the author has to decide. Life and cultural mores change sometimes in the blink of an eye. If you don't believe this truth, just think back over the last year or two. Cultures constantly evolve, whether technologically or morally or financially. Five years ago, people and corporations routinely used checks. Now almost all money transactions are via electronics. Music was sold by CDs. I have no clue how it's sold now as I quit buying when I couldn't figure it out any more. Movies have skipped directly from the theater to Netflix, Hulu, and Amazon.

For the most part, I believe leaving a book intact as written is best. Corrections (grammar, punctuation, spelling, and time-line issues excepted) should be minimal. After all, that book was written at a particular stage of the author's development. That's where they were at that time. And for me, at that time in my life, I was writing darn excellent steamy romance stories.