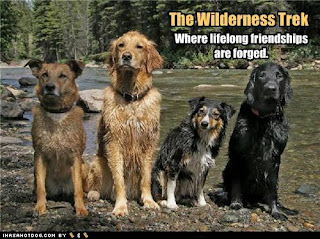 Friendships forged in the midst of adversity are bound together with iron chains. If it's a true life and death survival situation, then those chains may even be titanium.
Classic romance stories revolving around such situations are perennial favorites--especially those stories that isolate the h/h from all assistance, thus necessitating their dependence on each other.
One of my favorite books in this genre is a book written back in the late 70's or early 80's by Marlys Milhiser...Willing Hostage. It's a story of mistaken identity and survival in the wilderness while pursued by several different groups of bad guys. Ah, yes. And the h/h have a cat. Named Goodyear. At least once a year I read Willing Hostage.
Another fairly recent favorite is Ice by Linda Howard. It's the tale of a couple trapped by a ferocious ice storm in a house with two psycho meth addicts. Talk about some scary stuff!
Whatever the danger, the act of working together to survive creates a bond that can't be broken. When the survivors also have sexual attraction between them, that bond is even stronger.
I call such stories survivor stories. What about you? Do you like survivor stories? And if so, what are some of your favorites?
anny
Posted by Anny Cook at 10:00 PM