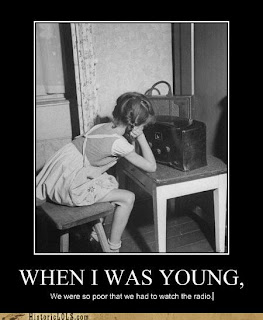 My granddaughters are here this week. And the universal cry is "I'm bored..." We talked about what Nanna (that would be me) did when she was young. They were fairly appalled to discover that I didn't have cell phones, video games, and other electronic paraphernalia in my youth. But the crowning touch was when they found out my family didn't have a television.

To be perfectly honest, it wouldn't have made much difference if we had one because we lived so far out in the sticks there wasn't much available for television, anyway. It was well before cable and satellite was even a twinkle in someone's eye. I remember the to-do Sputnik caused when the Russians put it up.

Movies showed up once a week at the tiny theater in town and besides...they were considered sinful by most folks in town--except for the new Disney movies. I remember the excitement when I got to go see Bambi.

Mostly we went outside and played. Sometimes I rode my bike. I played with my dolls on a blanket under the shade of a mesquite tree. We didn't have any grass. It was dirt and rocks.

It rarely rained, but when it did, the yard was a sea of mud. Then we played inside on the living room floor. There were some critters to contend with, of course. Since I lived in the desert southwest, there were scorpions, spiders, millipedes, and other assorted wildlife. Somehow, we survived.

Telephones were grown-up devices. I remember the half-dozen times I was permitted to talk to someone on the telephone prior to my teen years. Time was strictly limited on the telephone. It wasn't an entertainment device. And we shared a party line with other people so whatever you said was broadcast through out the town.

The thing that strikes me now was I never felt underprivileged or deprived. Life was what it was.

I wonder how our children of today would cope if they were suddenly tossed back in time?