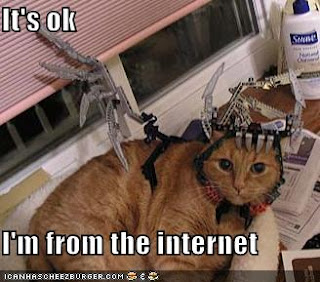 For the last several months we've had intermittent internet issues. For the last two weeks, the issues have deteriorated to the point that they stretch from minutes to hours. Yesterday, it was down sixteen hours. During a forecasted severe weather event.

I learned something from our internet loss. We're relatively blind, deaf, and mute without the internet. We don't have cable, depending instead on the services of the Internet for news, weather, and information.

Suddenly, we found ourselves without any of those services. It was a sobering experience. We don't have fancy cell phone service, preferring the steadiness of landline service. I'm a tad old-fashioned. When I leave home I don't want to hear from anyone. That's why I go out. My cell phone is a cheapy I use when I leave town.

What I discovered was a blackout of information. Television unfortunately has ceased to serve as a source of information... or even entertainment. Without cable, there was no current weather information available. Most channels now depend on the internet to disseminate information between standard news broadcasts.

I could (and did) write, but every time I had a quick question or reference check, instead of popping on the internet long enough to check it out, I had to set that question aside until later.

By late evening, I plucked a paperback from my extensive collection and settled down to read. It was almost like the 'olden' days. Quiet, a bright light, a book and a cup of chocolate.

Maybe I don't really need to know what the weather will be...