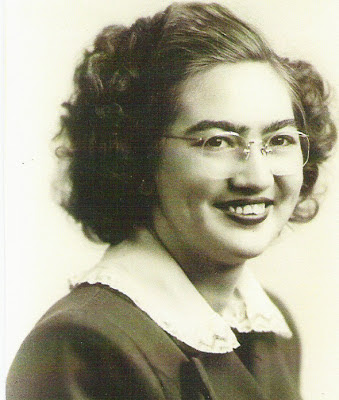 Fifty three years ago today my mother was laid to rest. She was thirty-one years old when she died in an automobile accident near midnight on a lonely New Mexico road. I was ten. In the way of life's memories, most of what I recall is misty and vague.

I was the oldest of four children. My brothers were seven, five, and three. They were in the car with her. Other than my youngest brother's broken leg, they were unharmed.

The few memories I have are disconcertingly sharp. When I was eight, we lived in a small 'shotgun' house in Hayden, AZ. It had worn tile floors, but she mopped and waxed with a vengeance. Paste wax. Then she gave my brothers and me old rags that we stood on and 'danced' to polish the floor. I remember the giggles and laughs as we tried to outdo each other.

She played the piano for church. I learned the old hymns as I sat on the piano bench next to her, singing with joy--if a little off-key.

Once when I was nine we were in another car accident. We were alone on a gravel road in the desert. The car had rolled, ending on it's side. She boosted us all through the door on the 'top'. Once we out, she sent me down the road to a blind curve, instructing me to wave my red sweater to stop any cars that came along. The next car was a plain cop car. I was enchanted because it had a phone in it.

She was exceedingly crafty. Crochet, sewing, quilting, embroidery, cooking, baking... She made her tortillas from scratch and for my eighth birthday sewed two outfits for each of my dolls...all twenty seven of them. The year I was nine she crocheted a gorgeous hat so I could be a little Dutch girl for Halloween. I still have a shawl she crocheted for my grandmother.

She wasn't squeamish. A few months before she died, we found a mama scorpion and babies on her bedroom wall. I wanted to take them to school so she found a glass jar and helped me capture them. Oddly enough, I got in trouble for bringing them to school--not because of the scorpions, but because the glass might have broken and cut someone.

At five, I picked cotton by her side. At seven, I learned my Bible stories at her knee. At ten, I learned you can never take back the awful things you say in anger when I shouted, "I hate you! I wish you were dead!" Twelve hours later she was gone.

Unfortunately, we usually don't value what we have until it's gone. Hug your loved ones. Say the words. Say them at every opportunity.