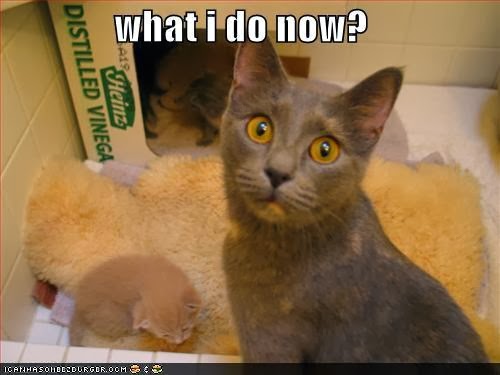 When we were small, our parents had a list of things they said--over and over. As kids, we scratched our heads and wondered how they could possibly make sense. As adults, we KNEW they didn't make sense, but that was life.

My favorite was "Always wear clean underwear in case you're in an accident." Now, if the accident was that bad, the medical staff isn't going to worry about whether my underwear is clean or not. After watching a lot of TV shows, I know the chances are high that someone is going to cut my underwear OFF--and in that case, it's not going to matter if they're clean, colored, lacy, or in good repair. Maybe my parents should have said, "Don't wear your best underwear in case you're in an accident." 'Cause you know...they might get cut up or bloody.

Another one I never could figure out was "Eat all the food on your plate because people are starving in China (Africa, South America, etc.)" Here's my question--how does my stuffing my face help those starving people? Wouldn't they be better off if I sent them my food? Especially if it was boiled okra or brussel sprouts or calf brains or any of those other yummy things my parents were urging us to eat?

Then there was that old chestnut, "Children should be seen, but not heard." I believe this was supposed to refer to making sure we were well behaved. However, I always wondered why we were there in the first place. It's not like we were particularly decorative or anything. I would think they would want us to go outside and play so we could make all the noise we wanted to.

And there were rules...lots of rules. Like "Don't take second helpings until everyone at the table has taken first helpings." What if someone didn't ever take a first helping? What if they didn't like whatever it was...say chocolate cake or banana pudding? Then what? Were we supposed to just wait until our mom cleaned the table and put it away? How were we supposed to get a second helping then?

Or what about the one, "Don't reach across the table." Uh-huh. You could wait forever for someone to pass the biscuits--especially because you had to observe the second rule, "Don't interrupt the adults when they're talking (and you know they never shut up)."

Girls had it particularly tough. "Always sit with your knees touching." "Never wear patten leather shoes." "Don't wear colored underwear under a white shirt or pants." Actually, only really fast girls wore colored underwear. Everyone knew the GOOD girls only wore white...and sometimes beige. And if you wore red or black underwear, you were going straight to H-E-double hockey sticks.

I wonder what my kids puzzled over when I was in mother mode. Were the things I said as confusing to them? Or is this a rite of passage all kids go through as they're growing up?