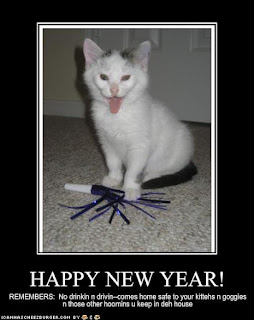 This morning I read through my Facebook feed, noting Happy New Year wishes and the sharing of plans for the evening. There seemed to be a 50/50 split between staying at home and going out to party. I freely admit the very idea of partying at midnight gives me the shudders.

I've been looking back, way back to the time when I was a youngster. I don't remember any particular celebrations for New Years until I was in my teens. There might have been some, but they weren't very important to me. Our family was what was known as a 'religious' family so drinking and dancing weren't our way, anyway.

I do remember the Watchnights of my mid-teens, though. As I've mentioned before, it was a very turbulent time. The body count from the Vietnam War was posted every night in the upper left hand corner of the TV screen during the news. The numbers were a constant reminder of our soldiers at war. The civil rights wars at home were no less disturbing. Riots, assassinations, burning cities, murders all led to instability and insecurity. Young people held demonstrations against all sorts of things. Woodstock shook up the establishment.

But I was talking about my times...

New Years parties were mostly for the wealthy and celebrities. Every day folks might have a small dinner or something like that, but 'good' people didn't go to bars or clubs. They celebrated with family and friends.

Our family attended a church that held a Watchnight service every New Years Eve. We arrived at church around 8 PM for a pot-luck dinner. I always loved pot-luck dinners at church because all the women brought their best dishes. It was a feast. After dinner, some folks visited while others play board games. And then around 11:30 everyone went upstairs to the sanctuary for the Watchnight service. We sang hymns. Several people read passages from the Bible that they found relevant to hope for the New Year. And at midnight we prayed for peace and compassion. After a last hymn, everyone went home.

I can't say if our celebration was better or worse than any others. But when we woke up on New Years morning, we faced that day with renewed hope. Perhaps, that's all we can really do. Face each new day with hope.