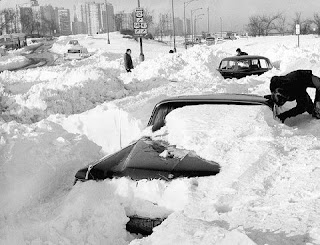 After I wrote a blog last week about the tremendous snow storm of 1967 in Chicago, a friend sent me this picture taken a couple days later. As you can see, the snow really was that deep... and frozen like a brick. So Amarinda and Helen, when you're sweltering in your heat, just remember this pic and think "cold".

At the time of the snow storm, we had a foster child staying with us. About a week after the storm, my mom sent my middle brother and the foster boy to the store to buy bread and milk. They never came home. After a while, she sent my older brother and me out to look for them. The snow was piled so high on each side of the sidewalk it was like walking down tunnels. We were out there quite a while, calling and walking up and down the streets around where we lived.

Finally, my parents called the police. The cops picked the two of them up, walking down the middle of the freeway--which was closed because it mostly looked like this picture. The boys had decided to run away to a park in southern Indiana, Tippecanoe State Park, where they planned to camp out for the winter. To that end, they had spent the money my mother gave them on a box of cereal, a box of matches and two bottles of soda.

Ahhh, to be young again.

If you cast your eyes to the right, you'll see a nifty black square that declares that I'm the winner. This morning Dawn Roberto, owner of one of the more active romance loops sent me an e-mail informing me that I've been voted the Best New Author of 2007.

Now, I admit to a certain amount of excitement and pride in that, even knowing that it really is a popularity poll. But then, so are book sales. Peers and readers vote for you--or not. I'm proud that some people thought enough of my work to vote for me. So I'll try not to let my head get too big for my hats. And I want to offer a heartfelt thank you to those that voted for me. I appreciate the thrill of it all.

I added a new place that you can check out my work, bookcovers, or just read my blog. I now have a facebook page at http://www.facebook.com/profile.php?id=717643076 so drop by there and check it out. It's still a work in progress. I have a feeling it will take me a while to decide what I want on the page so bear with me. If anyone has a suggestion or observation, please let me know!

It's supposed to rain/snow later on today. My feet are freezing. Later on today, I will haul out my foot warmer and plug it in. Quite frankly, writing doesn't generate much body heat--no, not even writing the "hot" stuff--and as I sit here writing, my feet slowly turn to blocks of ice. So I'll break down and use the foot warmer, plus socks, plus maybe even a lap blanket. In between, I'll slurp down several mugs of herbal tea. After which, I'll have to make a mad dash for the bathroom. You'd be surprised how many steps you can accumulate running back and forth to the bathroom. There actually is a method to my insanity.

Yesterday, numerous people "tagged" me. I'm supposed to tag six people, but most of them have tagged me instead, so I'll list the six odd facts about me and move on.

1) I speak two languages--English and Mystic Valley Ancient--with a smattering of a couple others (Elyrian and Genealogy). In case you didn't know, it ain't easy making up a language from scratch, let alone two or three. Pukeable notwithstanding.

2) In my lifetime, I have played a piano, guitar, violin, auto-harp, harmonica, dulcimer, accordian, organ, ocarina, mandolin, harpsichord, and psaltery. I'm not saying that I played them well, but I did play them. At the moment, I still own a guitar, accordian, electric keyboard, and have the ocarina and psaltery on order. Life is good.

3) I paint. I like to paint. I don't paint well, but since it's for my enjoyment, who cares? Maybe I'll be the next Grandma Moses and somebody will discover me. Why not?

4) I'm a secret pen collector and woe betide anyone who touches my pens. Once someone else uses my pen, it belongs to them as I won't use it again. Sigh. When I worked I had to lock my pens up at night when I went home. If I didn't one of the custodians would come in at night and scribble with every single one of them. Then they leaked. Oh, the trials and tribulations of dealing with a pen sneak.

5) I'm also a paper collector. Why? I have no idea. But I betcha I have more kinds of paper than you can shake a stick at. Tiny little scraps of paper. Enormous sheets of paper. Colored, textured, white, transparent, vellum, cardstock, hand made, you name it, I probably have it. I even have special origami paper. And it's all neatly categorized and stored. Just in case I need it for something special.

6) I like to bake bread. Honey oatmeal bread is my specialty, but I've also made, whole wheat, white, cinnamon, multigrain, and various "specialty" breads. There is something soothing about taking out your aggressions on a pile of bread dough. And when you're all through, you have something incredibly delicious to eat. What more could you ask for?


What could you spend an eternity doing? What is your passion? Your hunger? Your deepest desire? Each day beginning February 5 and running through February 14 one of the ten authors will complete the line, "My darling I could spend eternity…" on either their blog or website. Collect all ten answers and e-mail them to anny@annycook.com with Eternally Yours in the subject line to win some hot, romantic books. There will be three lucky Valentine winners.

3rd prize--2 books
Entries must be in by February 16 at midnight EST. All books and prize winners will be drawn randomly.


Finally, don't forget to stop by Kelly's Blog at www.kkirch.blogspot.com and at Amarinda's Place at www.amarindajones.blogspot.com as Amarinda has the Saga today. Blessings on your day!
Posted by Anny Cook at 12:34 AM