"Let's get organized!"--my stepmother's battlecry everytime there was a new project. After a while it became a family in-joke. We threatened to get her a t-shirt with it printed on it.

As I mentioned before, I cleaned my desk. Rearranged stuff. Put away stuff. Sigh. Now I can't find 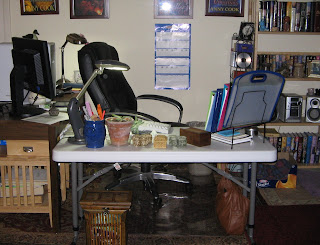 anything. So here's a picture... look quick because you won't see it that clean again.

I'm not an inherently neat person. Especially with papers. I'm a great vertical filer. As long as I don't have to move the pile for some insane reason (such as cleaning the desk so I can move it!), then I'll know exactly where a particular paper is in a particular pile.

It used to drive my boss insane. One time when I was in the hospital, she decided to "clean" my desk and file all of the papers in a drawer.

Some things we never found again. Every time she asked for a file that she had put away for me, I would look at her in helpless puzzlement and she finally sighed one day and promised that she would never, ever touch my desk again.

Everyone has a system. Vertical filing is mine.

One of the things that I'm asked with fair frequency is how I keep track of all the people, words, locations, etc., in my series. For each series, I have a notebook. If you look on the right side of the desk, you can see the notebooks on the corner. Each book in the series has a separate section of the notebook. There are village rosters, family charts, maps for each book. In the front of the notebook is a glossary that's updated with each book's additions.

Masters of all the papers are kept on the computer, but I find it easier to consult the notebook than flip back and forth through computer files when I'm working. So the notebook is the "bible" I work from. Each notebook also has a master name list so that I don't use the same name twice. In real life, we run into people all the time with our name, but readers find it confusing, so I don't re-use names in the same series.

The maps are updated with changes with each book. As the Mystic Valley series progresses, there will be more and more physical changes in the valley. And since I would prefer that my characters are going in the right directions, I always use a map to plot their actions. Sometimes I also have floor plans to keep track of where I place the furniture--or the bathroom!

Some writers use dolls to keep track of body parts during the hot and heavy action. I haven't reached that point, but I suppose I could add a sketch or two if it gets weird. So far, I'm tame enough with the action that I don't require visual aides.

I have a neighbor who draws like a dream. I think I might ask him to draw some pictures for me. The drangs, dintis, packits, and grimahrs for a start, plus the valley fashions (shardas, sheras, and meerlims) and maybe some of the houses. If he does, I'll post them one day.

And it might be interesting to have the dragons and the tooth fairy from the Camelot series, too. Percival, Bart, Pansy and Gerard would all make wonderful illustrations. Yes, I think I'll do that. I'll keep you up to date on my progress.

Another question I am asked is how many books will there be in a series? And the answer is, "I don't know." I have a rough list of possibilities for each series, but they will only happen if the characters are willing to tell me their stories. Some characters are stubborn and just refuse to talk. I have too many other stories in my head to waste time fighting for a story that isn't happening. Maybe the answer is, "Until I run out of stories set in that world."

In the meantime, I will soldier on, trying to get organized.