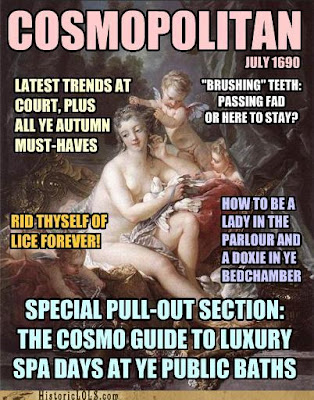 For a while now, I've been curious about whether women really pay attention to the articles in magazines or whether they buy them for the recipes and such. I read the covers when I'm standing in line at the checkout counters in the grocery store and wonder who decides what they put on the covers?

As far as I can tell, the most popular entry on all covers, regardless of genre, always has something to do with weight-loss. I confess I've bought a few, lured in by the possibility of some new suggestion or information.

The only thing of interest to me personally was the information that soy-based products shouldn't be consumed by individuals with thyroid problems. Since I had a doctor's appointment scheduled shortly thereafter, I ran that one by my doc and she concurred. I pointed out it would have been useful to know that during the previous four years when I was consuming a boatload of soy-based bars, drinks, etc.

The second most popular subject apparently, is sex. Can we talk? Is there really anything new? I recently read through a zillion blog comments about a book review on the subject. According to the majority of commenters, the author was depraved and wicked. Sigh. In that case, let's hope they don't read Victorian erotica such as the Pearl or the really good stuff written by the Romans or Greeks. There is nothing new. If you want to know what turns a man on, ask him. He'll be happy to tell you--in detail.

Back to the magazine covers...oh, yeah. Fashion. Some days I wish we never progressed past the chemise and dress stage. Two pieces. Put them on. Done. Of course, there would always be some smart-ass who decided she wanted a different color dress. And then some needle-quick hussy would decorate her dress with embroidery...

Put them on the covers and maybe, just maybe I'll buy your magazine. Maybe.