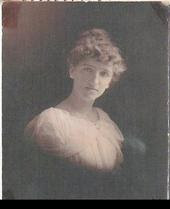 Last night I made my Grandmother's Chocolate Cake. Since it's my grandmother's recipe, naturally it's a cake made from scratch. And no matter how many chocolate cakes I've tasted in my life time (a LOT) there has never been one that matched Grandmother's.

In our family there was a tradition that you were not allowed to have the recipe for Grandmother's chocolate cake until you left home to live on your own or you married (which could be the same thing almost). Since I married at eighteen I was one of the early ones in the family.

The first time I made it my grandmother and I mixed it up together. That's a good thing as it was a "bit of this and a handful of that" kind of recipe. We worked it out that she did it her way and then I measured it out and we wrote it all down. There's a hot fudge icing that goes on top but I seldom make it as I love the cake just as it comes out of the pan.

When I was a youngster, after my mother died, Grandmother lived with us for a while and she made this recipe only she baked it in muffin pans. We had chocolate muffins to take in our lunches or on road trips. That was well before the Tupperware days so she packed the muffins in empty oatmeal boxes. Surprisingly, they kept very well.

I suppose you could say that when I bake Grandmother's Chocolate Cake I bake a few memories while I'm at it. My cousin, my grandmother and I all had birthdays in November in a span of four days. Our birthdays were always celebrated at Thanksgiving. And there were always the cakes. Mine was the chocolate one with a generous helping of pecans on top. My cousin (she was allergic to chocolate!) had one that was a banana cake. And Grandmother's was an applesauce cake. Actually, all of them were yummy.

A few years back my Grandmother died just days before her birthday. Things were really not good at my house. The house hunk had just fallen from a scaffold at work and crushed his ankle. The cars were limping on their last bit of rubber. Money was incredibly tight. And my grandmother's funeral was several states away. Two of my kids went with me as we set out on a marathon drive from New York to Indiana. In Scranton, PA the radiator died. A very nice trucker helped me select some "stop-leak" stuff to put in the radiator and we set off again.

Apparently the trucker passed on the word about the crazy lady in the bright yellow Ford Fiesta who was on the way to her grandmother's funeral because all along the route every time we stopped at a rest area, somebody would come up to me and ask if I needed anything. Strange fellows would check the radiator and make sure that it had water. Twice, people offered food. One guy treated us to breakfast at McDonald's. And one lovely couple offered to watch over us while we grabbed a couple hours of sleep in our car at a rest area.

Finally, we arrived in Gary about forty minutes late for Grandmother's funeral. I was wearing a sweatsuit as I had slipped in spilled antifreeze and soaked my "good" clothes. My intention was to wait until after the funeral and then go inside for a few minutes with my Grandmother but my dad came out to the car and persuaded me to come inside. They were waiting for me to arrive!

So that's how I came to attend my Grandmother's funeral in a grubby sweat suit. When I went through the door, my extended family was lined up in the hallway, and one after the other they hugged me and welcomed me and told me how happy they were that I came.

After the funeral I went to stay overnight with my cousin. We had dinner. And after dinner--we had Grandmother's Chocolate Cake to celebrate my birthday. Memories are precious, aren't they? And those with chocolate? They're the best.

Amarinda, Kelly, Barbara, Jae, Rita, and OhGetAGrip!
Posted by Anny Cook at 12:02 AM