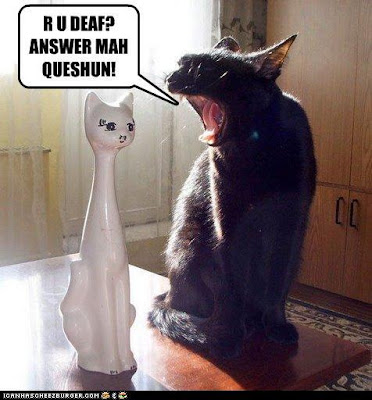 In the last few weeks I've reached the inescapable conclusion that I must be the most boring blogger in the world. Nothing exciting happens to me--at least nothing I'm willing to share with the zillions of people on the internet.

I'm not terribly funny. Or perhaps my sense of humor doesn't march along with the rest of the population. I march to such a different drummer we're not even in the same parade. We may not be in the same town or state.

I don't think I have anything profound or touching to say. But then again, the few times I've written what I thought was a particularly profound post, the resulting commenters silence was deafening.

I don't read or watch or listen to the same books, movies, TV shows, or music as the rest of the "world". And I confess I'm not interested in doing so. I'm not sure whether that means I'm an extremely shallow person--or the rest of the internet world is.

Marching to a different drummer is very isolating. So I wonder this. Am I the only one in the parade? Am I the only one marching along straining to hear the music, yet I inevitably know there really isn't any music? Or is that why writers and readers at blogs instantly jump on the bandwagon when they read a blog about shopping or sleeping or the latest celebrity scandal.

Perhaps all the social networks in the world have simply reduced us to the lowest common denominator. Rather than sharing new ideas and intriguing concepts and profound thoughts it seems to me all we're really doing is rehashing the same old tired ideas.

For the next two weeks I'll be gone to visit my family. Normally, I schedule a bunch of posts ahead of time to cover the days I'm gone. But this time I think I'll just take a break. After blogging for four years, perhaps it's time for a vacation.