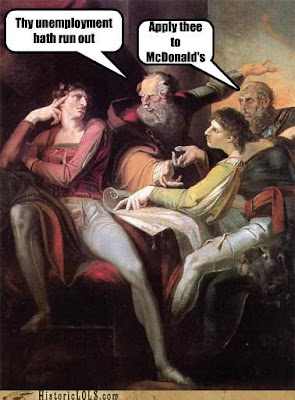 Way back when I was a very young woman--in high school--the government had a bunch of new programs to fight unemployment. It was the Johnson era (for those of you too young to remember, he came after Kennedy). If you were at least sixteen years old and your family was below the poverty level then you qualified to participate in the Neighborhood Youth Corp program.

Until a teacher approached me about this program, I didn't realize my family was below the poverty level. We had a warm place to live and plenty of food--thanks to my step-mother's careful planning. I talked to my parents about the program. And since it was all handled through the school, they gave their permission.

I recently found one of my check stubs from back then. The federal government paid me $75 a month to be a gopher for my teacher. For one class period per day, five days a week. Actually, when I look back on that, seventy-five dollars was pretty good money.

When I graduated from high school at seventeen, I had a new problem. In Chicago I couldn't work in any factory or warehouse until I was eighteen. And that was six months off. I finally landed a job at a school, Moody Bible Institute, as an accounts payable clerk.

I worked there a year before moving on to Bell and Howell (company that made Polaroid cameras). And then there were a series of jobs, mostly part-time until we moved to Houston. We had three small kids under four. The house hunk worked days, I worked nights.

Applying for jobs was very different back then. You met someone face to face. Your appearance was important. First impressions were important. Now, its all done electronically. I'm not sure I would ever get a job based on the "new" application system.

The year I was forty, I suddenly found myself unemployed because the warehouse where I worked closed down and moved to Tennessee. Just like that I was one of seven hundred newly unemployed workers in a small county with few employment opportunities.

Most of us took advantage of the retraining offered by the federal government under their displaced worker program. As I neared the end of the training, I grew more nervous. My husband was on disability for a work injury. I was on unemployment. And we were trying to feed six people--four of them teenagers.

THEN a pipe broke underneath our double-wide mobile home. In February. The hunk and I spent the morning under the house repairing the pipe. When we remembered I had class that afternoon, it was too late to do more than brush the mud off. Failure to show up for class meant a short check. So I rushed off to class in what I was wearing--muddy sweat pants and a tee-shirt with a tear at the shoulder.

Once class was settled in, my instructor came to me and urged me to go downstairs to apply for a job that had just opened up. I went down, asked for an application and filled it out. And then, really wanting to be professional, I inquired about a job interview appointment.

The secretary who took my application gave me a long slow look and went into the Director's office. After a minute she came back and said, "She'll see you now."

I was horrified. "But I'm not dressed for an interview!" I protested.

My heart sunk. Clearly I wasn't going to get this job. Deciding that I would use the interview as practice, I followed the secretary into the Director's office. We had a nice chat. She shook my hand and informed me she had a couple more people to interview and she would get back to me by the end of the week. That was Wednesday.

I started work the following Monday. And worked there for thirteen years.

I sometimes wonder how differently things would have gone if the initial contact was all electronic. Would it have made a difference? I don't know. I understand the reasons for the electronic application process. But there's something to be said for human contact, isn't there?