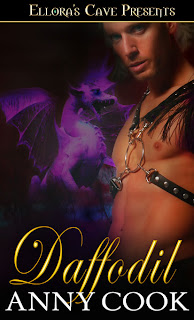 Eight more days... and Daffodil will be released by Ellora's Cave. Funny, but it seems only yesterday I was wondering if I would ever finish writing it. It's the third book in the Flowers of Camelot series.
I thought you might like a little taste. In this scene, Pansy the Tooth Faery has been captured by Bart the Dragon. She's trying to explain to Bart, Gerald the Giant, and Raulf the Butler what she's doing in the neighborhood...
Gerald stood up and stretched, touching the high ceiling with his fingertips. “You guys want me to go someplace for a while so you can work this out?”
Bart gave him an impatient glance. “No of course not. Pansy’s figured out how to get me stirred up so she’s having a wonderful time teasing me.”
“I am not!” Pansy declared hotly. “You belong to me! If you’re too blind to see that, I’ll just have to get you some new glasses! And this time I’ll make sure they fit!”
Gerald shook his head. “I think she’s got you there, Bart. You have to admit that those spectacles don’t fit worth a damn. If you didn’t tie ’em on with a bandana when you paint, you wouldn’t even be able to see the canvas.”
“If you’re not going to help, stay out of it, Gerald.” Bart turned his back on the giant and shook his claw at Pansy. “Now you listen to me, you faery, you. Dragons only mate with virgins. And I never heard of a virgin faery! So cut it out.”
She turned her head away so that he wouldn’t see the quick tears seeping from her dark purple eyes. “There are so virgin faeries. Stupid old dragon. Everyone has to have a first time. Just ’cause I never did it doesn’t mean I can’t.” She sniffed very quietly.
Bart peered at her suspiciously. “Are you crying? Oh, don’t do that to me. Don’t you do that. Crying?”
“I’m not crying,” she denied, turning her back to him so he wouldn’t see her sniffling.
“Yep. She’s crying. Now what are you gonna do?” Gerald demanded.
Raulf stood in the doorway watching in disbelief as the drama unfolded. “What the hell is going on? And who is this damned faery?”
Bart rolled his eyes at Raulf in dismay. “This is Pansy, the tooth faery. I found her in the woods.”
“And he couldn’t resist bringing her home like a stray puppy.” Gerald stomped out to the kitchen, leaving Bart and Pansy to Raulf’s mercy.
“Why would you bring a faery home, Bart? Especially now with all the rebel activity?” Crisp salt and pepper curls sprang up when he raked his fingers through his hair. “Now on top of everything else, Florian’s shown up to take the girls to Came-a-lot. I can’t find Daffodil anywhere. The stable men are hiding from Florian so he can’t fire them. Fat Mildred refused to cook dinner…”
A faint gasp drew his attention back to the faery. One small hand covered her mouth as her eyes widened in shock. “Daffodil?”
“What do you know about Daffodil?” Raulf demanded as he stalked closer to loom over her menacingly.
“Hey, hey, back off. She’s here to find Daffodil’s tooth.” Bart shoved Raulf back with one paw and grabbed Pansy up in the other, cuddling her against his scaly chest.
“Are you crazy? Or an idiot? Daffodil has all of her teeth.” Ready to explode with exasperation, Raulf turned on his heel and stomped over to the fire.
“This is a baby tooth,” Pansy said quietly, peeping at the angry Raulf from the safety of Bart’s arm. “Daffodil’s mother traded it to Morgana a long time ago in exchange for a love potion.”
“Who told you a wild tale like that?” Raulf’s scornful tone clearly communicated his feelings about Pansy’s explanation. “A leprechaun?”
“Actually, Daffodil told me herself, back when she was a little girl. I planned to retrieve the tooth back then but the Faery Council transferred me to the other side of the country. Now they’ve decided that it’s critical to get her tooth back, so here I am.” Pansy clambered up to Bart’s wide shoulder where she perched with folded legs, crossing them Indian-style. “I was doing fine until Bart snatched me right off the trail and carried me back to his cave.”
“You’re serious.” Raulf stared at her unhappily, conceding that her story made perfect sense, especially to anyone who knew Fauna.
She crossed her heart and nodded soberly. “As a rotten tooth.”
Remember... only eight more days.
Anny
Don't forget to stop by Kelly's Blog at http://www.kkirch.blogspot.com/ and Amarinda's Place at http://www.amarindajones.blogspot.com/ Blessings on your day!
Posted by Anny Cook at 12:01 AM