St. Pat's This and That 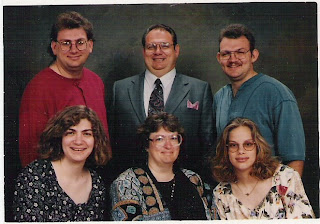 Computers. Does anyone out there remember when there weren't any personal computers? Yeah? No transfer of information and files and programs when you swapped out the old one for a new one, right?

I spent the day on Sunday upgrading, swapping, installing, etc. all my stuff from my old computer to the new one. In addition to all that moving (both electronic and physical), I've had to learn how the new programs work. Upgraded Microsoft Office. Upgraded desktop setup. This thing doesn't talk to that thing now. Sigh. And today it's back to the writing whether I have it all set up or not.

Two programs will not install. So later today I also need to call the customer service people and find out why my programs don't like the new computer. It's like I told the househunk--just thinking about the adjustments almost make me consider sticking with the old computer. And then that sucker will freeze up while it's doing something real complicated like connecting to the internet and I just shake my head. All right! I'll deal!

St. Patrick's Day. Not being of the Irish persuasion, I have to admit that St. Patrick's Day never was of much importance in my general scheme of things...until thirty years ago today. And what happened then, you say? Well, I found out I was pregnant.

Now I suppose that wouldn't normally be an earth-shaking event, but in my case it was more than a little startling. We had three children 9, 8, and 5. My househunk had his tubes clipped when I was pregnant with number three. So you could likely see why I was less than prepared when the ultrasound tech announced, "There's your baby!"

I was twenty weeks pregnant. That's right. Five months. There are certain benefits to being five months pregnant before you find out. That only leaves four more months to get through. All that morning, afternoon, evening sickness? I thought it was a particularly virulent flu. That lump in my belly that suddenly popped up? I was terrified that I had cancer. Overall, pregnancy was a goooood thing.

We were way past broke, verging on life below the poverty level. Because our family was officially past the baby stage, we'd given all that stuff away--you know, the crib, baby clothes, maternity clothes, stroller, etc. As I drove home that afternoon all those things were swirling in my mind. I was in my second semester of college and in fact had to miss my English midterm because of the ultrasound appointment. I couldn't wrap my mind around having another baby.

When I finally got home, I sat on the side of my bed and just sort of blanked out. What were we going to do? My oldest son came rushing through the door after school and ran into my room. "Mom? What did the doctor say?"

Heh. He sat down next to me, expecting me to tell him that I had to have surgery or something. Instead I said, "We're going to have a baby."

My nine year old patted me on the back. "It's all right Mom. We'd rather have a baby than a vacation anyway."
Well, we survived that bump in the road as we always do. The picture at the top of this post was taken when I finally graduated from college seventeen years later. As you can see, all the kids were at home. The young man on the right came home on leave from the Navy to watch me walk across that stage. And the young lady on the right? Well, she was my caboose. And she turned out mighty fine in the end. Happy St. Pat's Day.
Anny
Start out your week right by stopping at Kelly's blog at www.kkirch.blogspot.com and then popping over to Amarinda's Place at www.amarindajones.blogspot.com for fresh insights on living the life. Blessings on your day!
Posted by Anny Cook at 12:15 AM