Pain of Getting Older 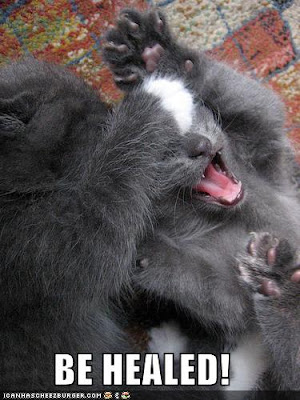 So I spent the better part of Monday evening at a diabetes clinic learning stuff. I have four more classes to go to over the next couple of months. Among other things, I learned how to use a neato little gadget to check my blood sugar. Of course, puncturing my precious skin with a fancy pushpin three times a day isn't so nifty, but I'll survive.

What is it with aging? You hit forty and suddenly your body has spasms and starts rebelling. What did I ever do to it to make that happen? I fed it ice cream and hamburgers and steak... so why the temper tantrums? I hit forty and the first thing out of the box was a nasty kidney stone with a spike on one side. It got jammed in the upper end of the tube running to the bladder, blew up my kidney like one of those small nerf footballs, and created a lot of anguish that was ultimately only relieved when I underwent a brand new procedure called lithotripsy. Let me tell you... well it's better than surgery. Maybe.

While waiting for that to be scheduled, I went into the OR so they could put in a stent and shove that sucky stone out of the way. Then I waited. Three weeks. It wasn't like it was an emergency, right?

We had to go about sixty miles away, because like I said... the darned machine was new. So. When I arrived, the nurse instructed me to undress--completely--and put on those ratty little gowns that hang open in the back. Then she took me into a room that had a strange recliner looking table. Only where the butt would be was a wide open space. After I crawled up there with the tushy hanging out, she had me scootch down until my butt was hanging in the wind.

Then I heard an ominous buzzing and suddenly this ice cold slimy covered piece that resembled a mini-water bed slapped up against the area from just above my waist to my lower backside. Yeow! It was cold!

Another fellow came in, introduced himself as the anesthesiologist and he proceeded to string me up with an IV. Next they offered me a head set and a choice of music. You know it's gonna be bad when they offer you music and headphones. And then the torture began. Four times a minute there was a bamm! and I felt pressure in the kidney area. The first ten times it was okaaaaaay, but after that it was just uncomfortable. I admit that breaking up the kidney stone with sound waves was definitely better than going the surgery route, but don't let anyone tell you it is painless. It took about thirty minutes, so four times a minute for thirty minutes is.... a lot.

Then the doctors unhooked me from all their gear and took away my music and the nurse returned. She helped me up from my waterbed of pain and wiped all the goop off my backside. That made me feel real grown up. I got dressed and the house hunk drove me home. I'm sure he was trying to be careful. Really. But I'm pretty sure that he hit every single pothole, crack, bump, and rough spot on the road on the way home.

Since then, it's been one thing after another. GERD (glorified heartburn), thyroid, high blood pressure, high cholesterol, fallen arches, falling boobs, whiskers !, unibrows, gray hair (heck, let's be honest--it's mostly white), vitamin D deficiency, calcium deficiency, and bad teeth. Where's a vampire when you need him? I know why vampires are such a popular fantasy. If you catch him early enough you don't do all this aging crap. I wonder if it's too late to make my plane reservations to Transylvania?