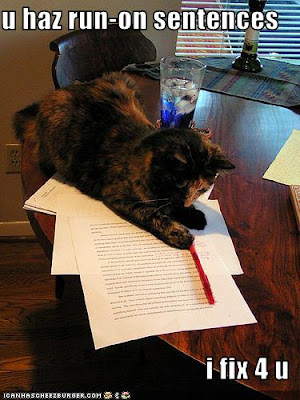 One writer may totally outline their book in excruciating detail (I know of at least one author who professes to do this) with pages and pages of notes. By the time they finish outlining the the outline is longer than most e-books.

Another author might sit down at the computer and write by the seat of their pants as the story unfolds in their mind. They never know exactly where the story will end up nor how they'll pull all the threads together before the end.

I suspect the majority of writers reach a point where they end up somewhere between the two extremes. I confess that I've tried both ways. Now I start the book by the seat-of-pants method, writing enough to see if it actually has enough merit to switch over to some minimal planning. If it turns out I don't really care for the characters, then it usually never makes it to the planning stage.

The second aspect of any writers process is quaintly called revisions or re-writes or editing. Take your pick. Basically, it boils down to smoothing out the rough edges. I think of it as the sanding process on a woodworking project. The more rough spots, the more sanding.

Since I detest sanding in big blocks, I tend to sand as I go. My writing process is one of writing for a week, letting the project sit over the weekend, re-reading/revising from the beginning on Monday, then moving forward.

That week long rest between re-reading allows me some distance--enough distance to catch minor errors and weird plot points. It also allows me to assess how well the story is coming together. Is it coherent? Am I scrimping on character development? Have I failed with description or dialogue?

The weekly re-read also refreshes my faulty memory about those things I've already mentioned that need to be explained OR not. I once found I'd expounded on the same minor point in three different chapters, thus making my heroine sound imbecilic. Not exactly the effect I was going for.

It also allows me to catch the really silly errors. Sue, the heroine begins a long scene dressed in dark jeans. Yet, twelve pages later, the hero is slyly slipping his warm hand up her skirt. Uh, no. In this case, there was considerable pondering before I made the ultimate decision to stay with the jeans. It meant some re-writing in the later parts of the scene, but at least I had valid reasons for dressing her like that.

Finally, that Monday morning read affords me the time to tweak my book plan. Is the story sticking pretty close to the plan or have I hared off into left field? That is not necessarily a bad thing. Sometimes, the characters have their own ideas about the way the story should go. Sometimes the plan doesn't deal with crucial issues so it has to be changed. When I finally finish the Monday morning read, I have a pretty clear idea of what the writing will entail for the rest of the week. Maybe.

And that's my writing process. For the most part. When nothing interferes with the schedule.