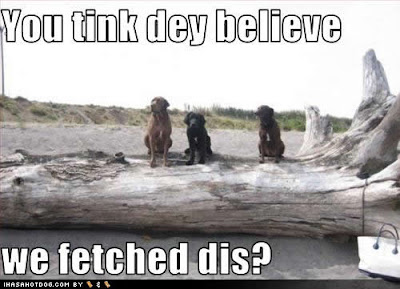 The key to enjoying a book such as one of the Harry Potters, or one of the Narnia Chronicles, or even My Favorite Romance is a simple suspension of disbelief. For a few short hours the reader willingly sets aside all that they have learned through their life to embrace the magic of talking animals or shape shifters or vampires or even far-fetched coincidence. But it is up to the author to shape the story is such a manner that the far-fetched seems not only possible, but highly probable.

Using the picture above as a jump start, how can I as an author convince my readers that the dogs did indeed fetch that log? How can I account for the seeming impossibilities? The simplest way might be to state that the dogs are shape shifters who fetched the log with a tractor. But I think that's sort of cheating. So how else can I deal with the imponderable problem? Perhaps...

Bobo sat on the log, panting in the terrible heat. His fellow warriors, Hazaz and Muri, rested on either side of him as they slowly caught their breath after wrestling the mighty log in place. Their pack shaman had forecast a terrible storm, a storm that would boil up from the sea with seething wind and drenching rains.

All along the beach where the sea met the pack lands, pack warriors were moving tremendous logs into place to serve as protective barriers between the fury of the storm and the vulnerable land. The faintest of whistles caught Bobo's attention. He sat up, searching their surroundings alertly.

"The storm is coming. Go help the others while I give warning. Hurry!"

Hazaz and Muri leaped down from the log to do his bidding, racing across the sand to help the other teams. Their exhaustion was forgotten in the rush to complete the protective barriers before the storm arrived.

Bobo loped up the beach to the small settlement where the shaman was directing the preparations for the trek inland away from the coast. "The storm is coming!" Bobo yelped.

The shaman uttered a sharp bark. All activity ceased as everyone waited to hear what he would say. "It's time to leave. Bobo will lead the first group. Mothers and pups, go now."

Immediately, Bobo led the way through the grassy capped dunes to the forest. Behind him, scared and subdued pups followed their mothers, anxiously trotting as fast as they could to keep up with the adults. Mothers carefully shepherded the little ones, keeping a sharp eye out for any who might fall behind. Old Marco, blind in one eye and lame, proudly carried a basket with his mate, Maisie's tiny one week old pups. She walked by his side, confident that her mate would protect them all.

On the beach, as the warriors pushed the last log into place, the first howling winds swept in scooping up the sand in terrible scouring whirlwinds. The warriors thundered over the hills for the shelter of the forest. On the highest hummock, the shaman paused for one last look at the long barrier on the beach. And then he turned away, fleeing from the storm.