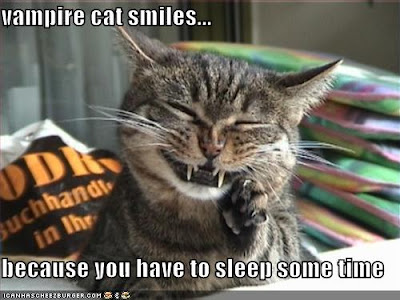 Over the weekend I went to see the vampires at the lab. Picture me surprised when I was zipped in and out with nary a bruise to show for my visit. The last two times, I came out looking like someone had used me for a punching bag.

The first time, a male vamp attempted to draw my blood. Everywhere he poked me, the blood quit running so he found a new spot. Poke. Blood dried up. Poke. Oh, lookey there! A couple of drops in the tube!
Three days later, I still had massive bruises on my arms.

After that visit, the head vamp admonished me to drink. Lots and lots of water, that is. No caffeine for two days before the labs. Water, water, water. So I kept that in mind for the next visit.

The next time the head vamp (doctor) sent me off to the lab, I went to a different branch. This time I had a female vamp. It was a repeat of the first visit. Poke. Drip. Poke. Drip. Fifteen minutes later, she had the requisite amount of blood needed. And I had four bandaids plastered to my skin. My question? If I wasn't bleeding enough to fill a test tube, why do I need bandaids? Eh?

So I doubled the amount of water. Sloshing like an old wringer washer, I arrived at the lab, filled out paperwork and sashayed into the room, really nervous because while I can deal with the needles in general, come on! Four times?

While I was still psyching myself up for the jab, the technician was slapping a bandaid on my arm. "All done. Pee in this cup." She handed me a little plastic cup, pointed out the bathroom door, and called "Next!"

Now as I took pains to explain to the house hunk, females do not have aiming equipment. Providing a sample is complicated enough without having to aim for a small target. Heck, most guys can't hit the toilet and that's a lot bigger target that a small cup.

And that's not even talking about the three towelettes you're supposed to wash the area with, plus pee first, stop and slip the cup in the approximate position, then pee in the cup--if you guessed right. If not, the cup is not what gets wet.

After my adventures at the lab, we went for a fast breakfast at Panera's and then stopped at Michael's, a large craft store. I mentioned last week that I went to Office Depot to have my book covers printed for me. They're all 11X17 inches. Try finding frames in that size. I finally located some at Michael's so everytime I add a few more book covers to my stable, it means a trip out to Michael's for frames.

Oh, no! There weren't any frames that size. Oops. Wrong aisle. Picked up the frames. Paid for them. Discovered they were all a third off the cover price! Considered going back for some extras, but my better judgement prevailed so we stashed everything in the Cookmobile and came home.

So what did you do over the weekend?

Don't forget the contest! Scroll down and click on the banner for all the details! Best of luck!
Posted by Anny Cook at 12:05 AM