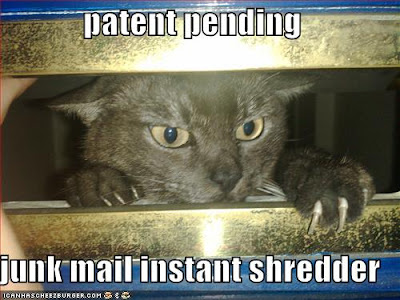 Just when junk mail was beginning to overwhelm the U.S. Postal System, millions of people made the move to e-mail. And everyone breathed a sigh of relief--too soon, as it turns out. Now I'm bombarded by junk mail, both snail mail and electronic.

The snail mail is the standard stuff--ads, insurance offers, credit card offers (though those have dropped off dramatically since the economic crash!) and the odd offer for cable TV.

The electronic junk is much wilder. I receive all sort of offers for penile enhancements--oral, creams, exercises, and pictures of naked women. I have a bunch that regularly offers me pictures of naked men. And then there are assorted offers to become my "good" friend.

Then there are all the e-mails that breathlessly inform me that I've won! I've won millions of euros, dollars, yen, and other assorted currencies. All I have to do is send them my name, social security number and bank account number and they'll send the money right over. Uh-huh. And if I believe that, they have a bridge in the desert to sell me.

A variation of the lottery win is the "letter from Africa" that I receive almost daily. In this letter the writer claims to be the representative of some VIP who needs to ship their money out of the country. If I just send them my name, social security number and bank account number, of course they'll split the money with me. Riiiiiight. I've also received this letter from a couple of countries in South America and another from the Philippines. So I guess you can't keep a good thing down, huh?

I used to get all sorts of offers for super cheap software programs, but that seems to have tapered off. I'm not sure what I was supposed to do with the programs, but I suppose if one person out of every hundred responded, then their campaign would be considered successful.

I also get the occasional offer to show me how to make my career successful through better web pages, blogs, promotion, etc. And there have been at least two offers to edit my books. Odd stuff, that.

So what do you have in your junk mail?